Something Wicked: How the Imagery of Macbeth Shaped Our Halloween Traditions

What better way to prepare for the seasonal festival of Halloween than to revisit Shakespeare's darkest tragedy: we take a look at the enduring imagery of Macbeth ...


Halloween (also known as 'All Hallows Eve') is a yearly festival on the 31st of October, the eve of All Hallows' Day.

The Gaelic Pagans  held the yearly festival to be a time when the walls between our world and the next became thin and porous, allowing spirits to pass through. These pagan traditions were particularly strong in Ireland and Scotland : which may have been one of the reasons William Shakespeare chose to set his darkest supernatural tragedy Macbeth (1604) in the Scottish Isles.

The sense of a 'curse' or evil energy attached to the prose and performance of Macbeth has led to the infamous tradition that bad luck will befall those who speak it's name aloud. Actors in the theatre are instead encouraged to refer to 'The Scottish Play'.

The wild and windswept Highland setting was also chosen by Shakespeare to appeal to the new King James I of England, also King of Scotland, who ascended to the throne in 1603, uniting the English, Irish and Scottish Crowns for the first time.

King James was a patron of the arts , but also curiously preoccupied with the supernatural (even for the seventeenth century!) The King had published his own treatise on witchcraft, Daemonologie (1597) in which he reveals a highly developed fear of black magic and the power of sorcery.

James' fears were symptomatic of an age in which bitter struggles between Catholics and Protestants across Europe created a climate of religious mania and political paranoia. One of Shakespeare's greatest strengths was his ability to tap into the psyche of his contemporary audience: yet Macbeth's  famous witches, ghosts and wild hallucinations have maintained their intensity for over four centuries.

Many of the most recognisable and well-worn Halloween tropes come straight from Macbeth: an eye of newt, a bubbling cauldron...Of course Shakespeare drew on old traditions, but his 'Song of the Witches'  has amplified the image of The Witch in popular culture like no other single piece of art or literature.

Both the Gaelic pagans and Shakespeare's Jacobean audience would have believed that the period surrounding 'All Hallows' was the time when spirits were most likely to appear: and the power of the witch was at it's strongest. It is during this annual festival that we allow ourselves to be a little less skeptical and take a little more seriously the power of charms and spells- if only for fun !

With this in mind, we've found some ingredients from Grays for our very own witches cauldron to summon up the spirit of the season ... 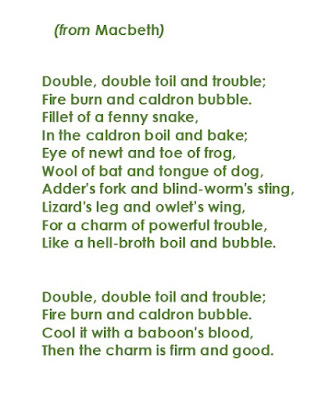