Today; 21, April, we celebrate the Queen's 90th birthday, and with this in mind, we have decided to put the spotlight on one of Her Majesty's favourite fashion designers; Norman Hartnell (1901-1979). June Victor at Vintage Modes, Grays, has a covetous collection of Hartnell finery on offer, as she also does at sister centre Alfies.

Hartnell came to prominence when he gained the Royal Warrant as dressmaker to Queen Elizabeth the Queen Mother in 1940 after designing the famous 'White Wardrobe' (photographed by Cecil Beaton) in the late 1930s, which changed the Queen Mother's image forever. These elegant Norman Hartnell gowns were worn on a royal visit to France, aimed at strengthening Anglo-French ties. The French press praised the demeanour and charm of the King and Queen during the successful visit, augmented by Hartnell's wardrobe.

Hartnell went on to design gowns for the two most important occasions in the Queen's life: her wedding and her coronation. Six years after Hartnell designed Queen Elizabeth’s sumptuous wedding dress in 1947, he was commissioned to design the coronation gown - the iconic dress of the mid-twentieth century - and Maid of Honour gowns. It took eight months of research, design and workmanship to make the intricate embroidery of the coronation gown. The Queen was so pleased with the outcome that afterwards Hartnell began to exclusively create her entire wardrobe and produced many of her finest evening dresses. Hartnell gained the Royal Warrant as dressmaker to Queen Elizabeth II in 1957.

The largest display of the Queen's dresses and accessories, including Hartnell's designs, will open to the public later this month to mark the monarch's 90th birthday. The exhibition - Fashioning a Reign: 90 Years of Style from the Queen's Wardrobe - is today being held at the Palace of Holyroodhouse, her Scottish home in Edinburgh.

However, if you long for a highly sought after Norman Hartnell piece of your own, then look no further than Vintage Modes, Grays.


All items posted are for sale. If you have any queries please leave a comment or visit us at Grays in Mayfair, London Alternatively you can call us on 020 7409 0400 or email info@vintagemodes.co.uk
No comments:

Please tell us a bit about yourselves and what you specialise in.

We are Hallmark Antiques. We have been in business for 37 years, specialising in small silver collectables and Arts & Crafts items, including Liberty & Co silver and pewter items, with original enamels. We also stock fine jewellery.

How did you start your career in antiques?

One of the partners of Hallmark Antiques is a member of The Gemmological Association of Great Britain, which enables us to give professional advice to our customers. We enjoy what we do!

Do you have a personal favourite in your collection?

Yes, a giant copper inkwell made by the famous metal artist, Richard Rathbone. I've never seen one like it before. It's one-of-a-kind!

Do you have an item that has an interesting story behind it?


Richard Llewellyn Rathbone (1864-1939), was one of the best metalworkers of the Arts and Crafts Movement. He was born in Lancashire, son of Richard Rathbone, a Liverpool merchant. He established his own studio in Liverpool in the 1890s and taught metalworking at the University of Liverpool. In c1903 he moved to London where he was appointed head of the Sir John Cass Institute and taught at the London Central School of Arts and Crafts. He supplied many companies like Morris and Co, Arthur Simpson and The Handicrafts, and Liberty's to name but a few.

Below is just a small example of the stock Hallmark Antiques currently have on offer.


Hallmark Antiques were recently recommended by Bonhams as a place to buy Art & Crafts antiques, in The London Magazine. 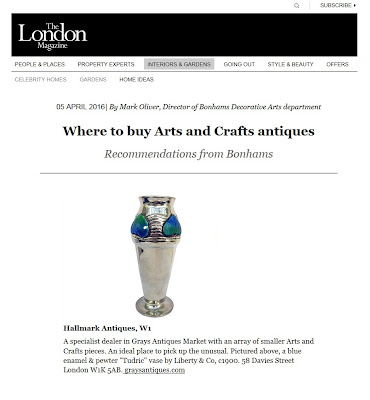 The Watch Through Time

Timekeeping has been part of our culture for thousands of years and through time we have made use of various instruments such as large obelisks, water clocks, candle clocks, time sticks, hourglasses and sundials. The most common version is called the sexagesimal system which is a numeral system with sixty as its base. It originated with the ancient Sumerians in the 3rd millennium BC and was passed down to the ancient Babylonians, and is still used, in a modified form, today.

The modern watch, which was created during the 16th century, was made as a mechanical device powered by winding up a mainspring. The first timepiece to be worn on the body was also developed during this period and called a "clock-watch” and was either fastened to the clothes or worn on a chain around the neck. One century later the arrival of the "pocket watch" became the latest thing for fashionable males, while the female fashion still kept to the pendant design and would do so until the early 20th century.

At the beginning of the 20th century new fashion trends migrated time to the human wrist, putting the wrist watch in the spotlight. Before this, the wrist watch had almost exclusively been worn by women, but now it was also introduced to the male wearer by military men fighting in the First World War. This was because of the need and importance of synchronizing manoeuvres without potentially revealing the plan to the enemy through signaling, making the wrist watch a perfect solution.

Here at Grays we have many wonderful watch and timepiece dealers, who have a variety of period pieces.

Below we have selected a few beautiful pieces:

Those of us born in April are fortunate enough to have the most valuable precious stone as their birthstone - the diamond. You have good reason to request sparkling diamonds as a gift this month, or to just simply treat yourself!

The ancient Romans and Greeks believed that diamonds were tears cried by the gods, or splinters from falling stars, and Romans believed that Cupid’s arrows were tipped with diamonds (perhaps the earliest association between diamonds and romantic love).

It is clear to see why diamonds are a girl's best friend! At Grays there is no shortage of dazzling diamonds - we are of course world famous for engagement rings - and we have rounded up a few examples of the stunning pieces our dealers have on offer.