Today's Antiques Roadshow will be a special one - it will be filmed at Balmoral, the Royal Family's most private residence. For over 150 years this castle has been home to royal traditions of picnics, stag hunting and kilts.


A large estate house in Royal Deeside, Aberdeenshire, Scotland, it became a royal residency in the Autumn of 1852, when Prince Albert formally took possession, the price being £32,000. In her journals Queen Victoria described Balmoral as "my dear paradise in the Highlands".

Along with Sandringham House in Norfolk, ownership of Balmoral was inherited by Edward VIII on his accession in 1936.

The lodge has been in the news periodically since 2005, because Queen Elizabeth often spends the first few days of her summer holiday in the lodge. Will she make a guest appearance on the Antiques Roadshow?

At Grays, we came across a few antiques that wouldn't look out of place in the Scottish home of the Royal Family....

The Antiques for Everyone Summer Fair

The Antiques for Everyone Summer Fair is the largest antiques, interiors and collectables fair outside of London, it is held three times a year at the National Exhibition Centre in Birmingham. Running from the 23rd until the 26th of July the fair hosts 200 dealers selling a vast array of objects including furniture, 20th century art, jewellery, silver, ceramics and glass to name a few. All pieces are vetted by a leading team of experts like Antiques Roadshow's Judith Miller and Will Farmer, who will also be hosting a number of talks and events throughout the duration of the fair.

A few of our dealers are exhibiting at Antiques for Everyone - you will find Sheldon Shapiro, Saul Greenstein and DB Gems. So if you are unable to make it to the Birmingham fair, you can visit our dealers at Grays all year round.

The Magic of Perfume Bottles

Would you agree with Christian Dior that, “a woman’s perfume tells more about her than her handwriting?” You might think that this is a rather exaggerated statement, but some believe in the magical powers of perfumes; their ability to evoke memories and to stimulate senses. Such precious liquids required special vessels to match their extraordinary effects.

Until 1900 perfume was sold in ordinary glass vials from a chemist where you would have it refilled with your chosen fragrance.  The elaborate perfume containers desired by some had to be purchased separately at a much higher cost.  It was Francoise Coty, a Parisian perfume maker who, in the 1900s, launched the commercial perfume bottle that we have today. Inspired by Rene Lalique and his famous glass creations, Coty commissioned Lalique to design attractive labels for his perfume and later the bottles themselves.  This proved a great success in changing the face of the perfume business forever.

The most exquisite period of perfume bottle design was the 1920s and 1930s. At that time there were 400 manufactures of glass perfume bottles in France. Today there are only three.  The early bottles had hand made stoppers which were hand-ground into the bottle. Each fit was unique, so numbers were engraved on stopper and bottle in order that they could be matched up after filling. This was a very costly process until about the 1970s when plastic stoppers were introduced. This is a viable way to date a bottle.

Perfume bottles are an excellent choice for those looking to begin a collection. Their style, age, rarity and condition play an important part. They are small to house and are a great choice for any budget.

Here is a hand picked selection of perfume bottles from Grays’ dealers:

Masterpiece London is the leading annual international cross-collecting fair for art, antiques and design; showcasing works that span over 3,000 years of art history, from antiquity to the present day. This year the fair ran from 25th June to 1st July at its usual home; The Royal Hospital, Chelsea. The glitterati and lovers of all things refined descended on the fair to find highly covetable items, such as a rare Andy Warhol or vintage Van Cleef & Arpels to add to their collection. 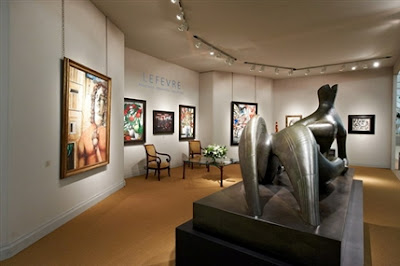 If you didn't make it to this year's Masterpiece London, do not fret. Grays has a sublime mélange of aesthetically pleasing objects you will find all year round. Here's a delightful selection of our dealers' stock: