The Georgian period, 1714-1837, was defined by the four Georges from the Hanoverian Monarchs of the United Kingdom. This period of time, being most of the 18th century and the beginning of the 19th, was a time of rapid and intense societal change, where eccentric and fascinating individuals and events began transforming the world.

As a result of the change in society, luxuries such as jewellery were no longer just owned by aristocracy and was now becoming more widely available for members of the middle class. With a change in their attitude to life and the extreme dedication to look stunning for social events meant that a great and competitive demand for jewellery was created, but even with the huge amounts of change in fashion between now and then, many cherished examples we have today are still timeless.

In the Georgian era however, certain styles of jewellery were designated to a certain time of the day. During the day, women would wear a necklace or a pocket watch on a chain with a cameo pin and very small coloured natural stone rings that matched their bracelets and earrings not forgetting the most important piece; the Chatelaine. This was a piece of jewellery that would be hung from a belt with chains covered in all kinds of coloured stones such as garnet, emerald and ruby. Middle class women took a shine to deep sea treasures, wanting coral and pearls matched with ivory and turquoise.

The gentleman's equivalent was a superb set of status advertising shoe buckles and buttons, which were studded with diamonds and gemstones.


The evening was a completely separate story however, with rose cut and mine cut diamonds stealing the show. The most popular way to showcase these delights were in a diamond riviere, or a "river of light" delicately set into a line of silver which was shined until it glimmered almost as much as the diamonds.

Another staple item was Girandole earrings. These beautiful creations were designed with a bow motif at the clasp, which would hold below it another stunning shape, which had a drop that lined pearls or stones to a chosen length. The evolution of earring style changed here, as the clip-on earring was invented so that women with un-pierced ears could enjoy the delicate pieces.

Sylvie at Spectrum has two stunning sets of Georgian natural pearl tassle/bell drop earrings on gold wires. These items can be found at Grays Antiques, or you can contact Sylvie at 020 7629 3501 or sylviespectrum@hotmail.com. 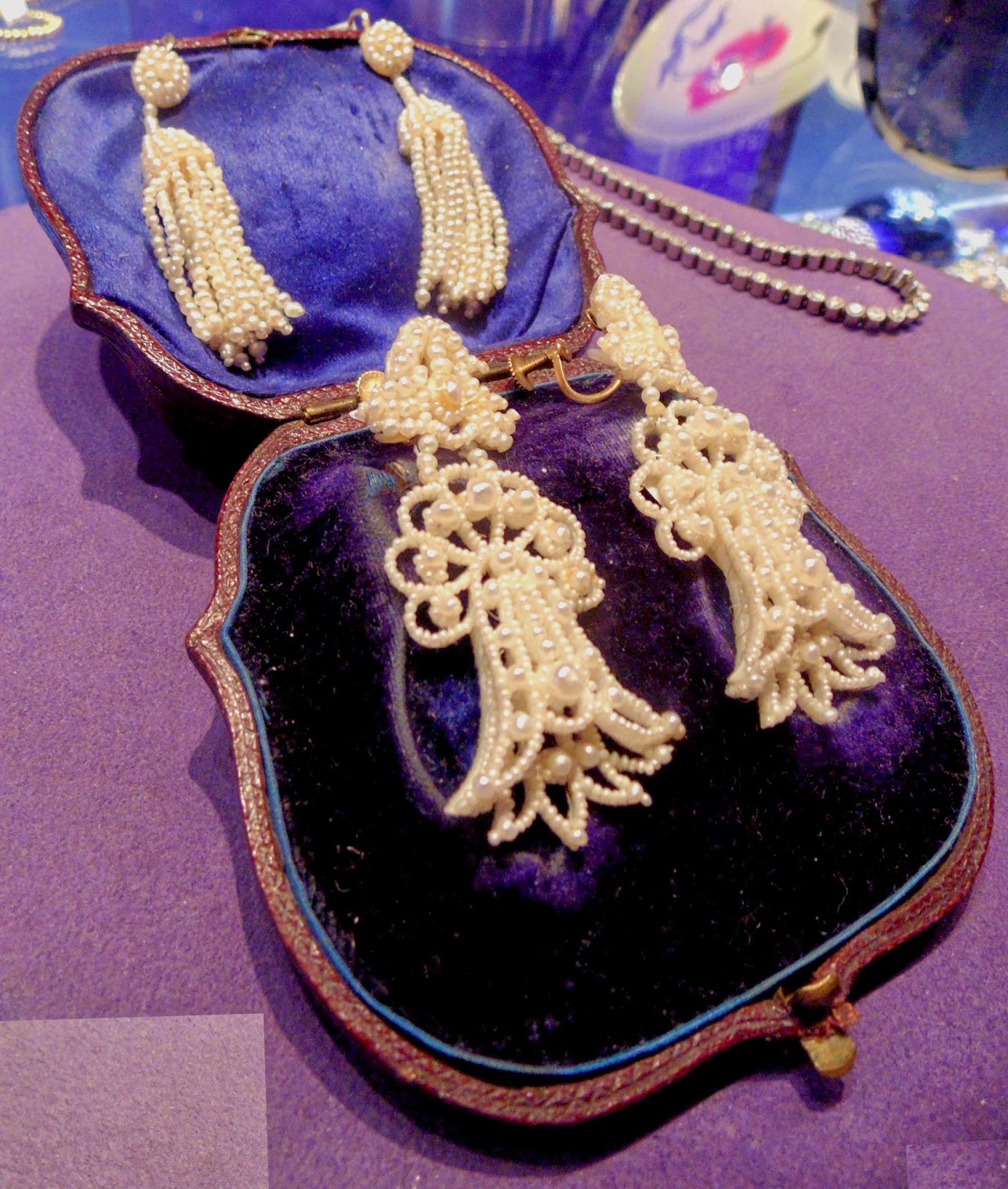 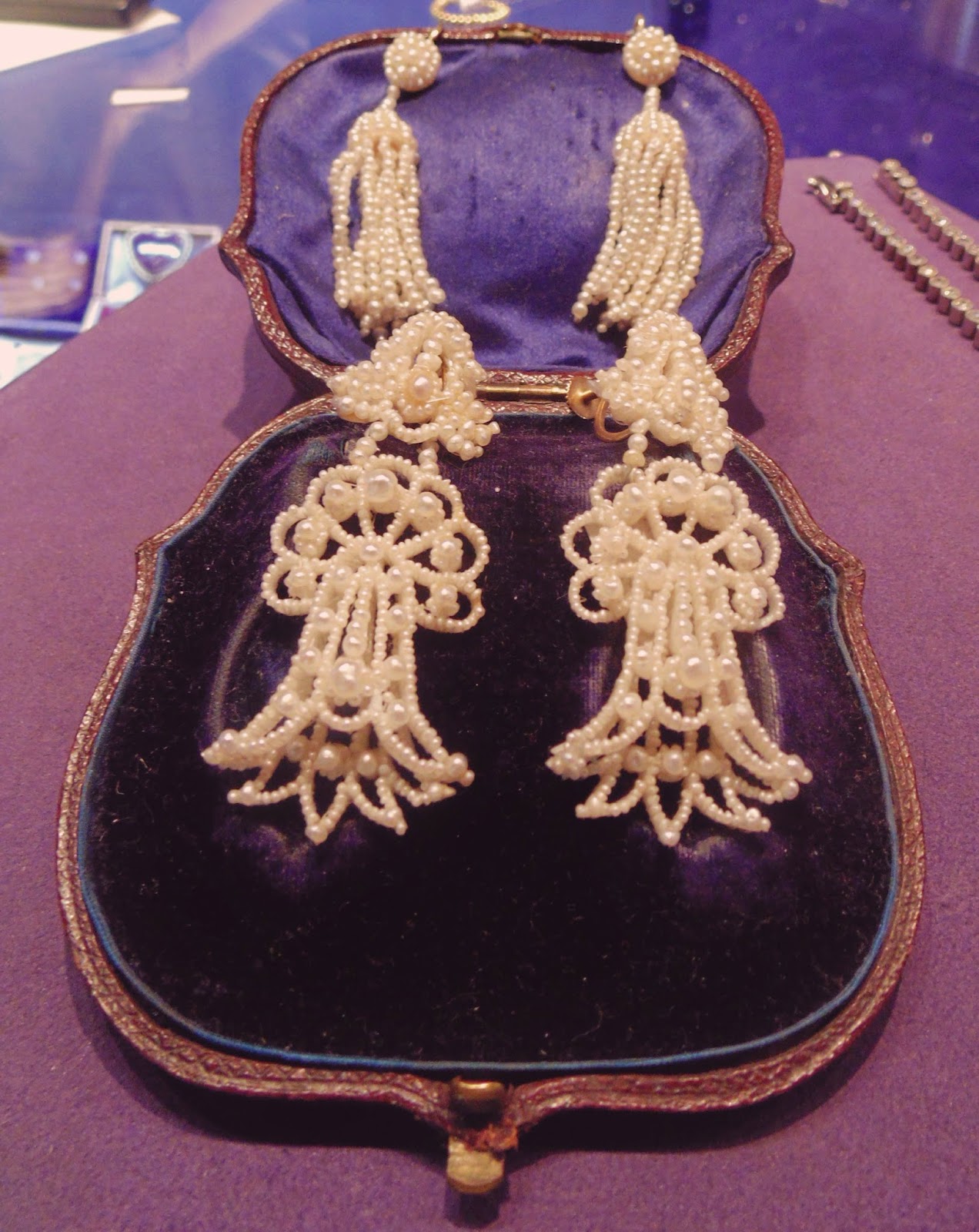 Dolls' house enthusiasts are in for a special treat this weekend. The V&A Museum of Childhood in Bethnal Green is holding an exciting event: Dolls’ House Study Day on Saturday 18th April. It promises a day of reminiscing about our childhood, filled with talks from expert speakers and a series of hands on workshops. If you can’t make it this Saturday though, there is still time to visit their exhibition: Small Stories: At Home in a Dolls’ House, presenting stories of 12 dolls’ houses from the past 300 years, until 6th September 2015.


While in town, pop over to Grays for some more dolls’ delight. Grays dealers are well respected experts in the field and you will be well impressed by their large collection of antique dolls.  Here is s quick selection of what’s on offer:

Celebrating its 30th year in 2015, Antiques for Everyone started on 9 April and will run until 12 April. Held at the magnificent NEC in Birmingham, you can rest assured there will be a vast range of items on offer comprising antiques, interiors and collectables. All items are vetted for quality, date and condition.

This event is the perfect place to source treasured items from well established antique traders, some of whom are our very own Grays dealers - Diem, Saul Greenstein, Second Time Around and Shapiro & Co.

It's rather apt that Cherish an Antique day was also on 9 April. Items from a bygone era hold so much history, yet have timeless appeal and were built to last, we think a day in homage to antiques is well deserved. Do you have a special antique that holds significant importance to you? The following items are offered by the Grays dealers trading at the Antiques for Everyone event. Could one of these items be your future 'Cherish an Antique' and heirloom for generations to come?

This Sunday marks Easter Sunday, which is celebrated by various cultures around the world. The most common tradition of egg-giving is a tradition that arrived in the U.S. in the 18th century. Originating from Protestant Germans in the Pennsylvania Dutch area who told their children of the "Osterhase" from Northwest European folklore, which then developed into the "Easter Bunny". According to the legend, only good children received gifts of eggs in the nests that they made in their caps and bonnets before Easter.

According to Swedish folklore, the witches travelled on their broomsticks to Blåkulla where they would celebrate witches’ sabbath. This resulted in locals hiding their broomsticks In order to prevent usage by witches, and shooting guns into the air to try and scare them away. This developed into the modern tradition of letting off Easter firecrackers. Easter witches are now more commonly seen in the form of children dressed up as ”påskkärringar” (witch-like creatures) hunting for candy.