The Horrors of War

The 4th of August marks the 100th anniversary of the German invasion of Belgium and the start of World War One. Many people are unaware of the true extent of atrocities committed towards innocent Belgian civilians by the German army.

Only recently, a series of etchings portraying the inconceivable plight that men, women and children suffered were rediscovered. These terrible events were known at the time as ‘The Rape of Belgium’.

The graphic illustrations were so horrific that when artist Pierre-Georges Jeanniot displayed his series of etchings, they were immediately banned by the police to avoid panic and public outcry.


Almost one century since the events occurred, these historically important etchings can be seen again. Acquired by Mark Hill, the set of ten original copper etching plates were professionally restored and the illustrations subsequently published for the first time.

An exclusive numbered, limited edition of 250 sets are available to buy. Each etching has been given a title relating to an event that took place.


The Horrors of War series can be viewed in Mark Hill's shop at Grays Antiques, stand G23. More information can be found on Mark Hill's website here.
No comments: 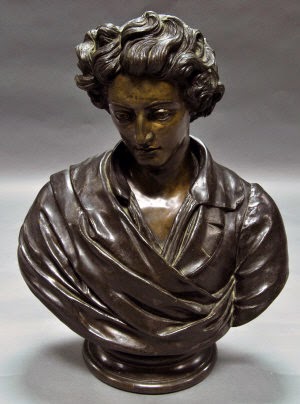 A twice life size bronze bust of the poet Percy Shelley by Amelia Robertson Hill (1820 – 1904) has been acquired by Tate Britain from Horton Art and Antiques.

Exhibited at the Royal Scottish Academy in 1882 and highly regarded by critics in its day. The bronze then remained in the artist’s home until her death in 1904.

Amelia produced only sixty works during her lifetime – mainly portraits, busts and statues – consequently her work is generally less known to the wider general public.
She was one of the first female sculptors to be given a public commission; her most famous work, the statue of David Livingstone in Edinburgh.

Commenting on this recent acquisition, the Tate Director, Sir Nicholas Serota said “We are extremely pleased to begin Amelia Robertson Hill’s representation in the Collection with this work”.

The bust will be exhibited in Gallery 9 of the Tate from August 2014.

Channel 4 programme ‘This Old Thing’ has sparked a resurgence of interest in vintage fashion, helping unsure fashion lovers broaden their shopping horizons. Presenter Dawn O’Porter has brought Grays under the spotlight by wearing – and dressing her protégés in – several outfits from Vintage Modes at Grays. As a regular shopper at Vintage Modes herself, she also featured us as a vintage shopping destination in her book ‘This Old Thing’. Thanks Dawn, we’re always glad to have someone looking fabulous in our collections!

Grays mews is a veritable fashion destination for vintage clothing, jewellery and accessories and is regularly featured in magazines such as Vogue, Tatler and Stylist. On our lower-ground floor as well as Vintage Modes - a well established collective of fashion dealers whose expertise in sourcing on-trend and classic pieces over the years have made them a reputable name to fashion insiders and celebrities – you will also discover Kitty Verity; who at the age of 22, has an eye trained for bold vintage costume jewellery. More vintage finds can be had on the ground floor at Linda Bee, located just next to reception and boasting a wealth of quality vintage jewellery and accessories. Linda has been trading at Grays for over 30 years now and has amassed a fine collection; specialising in vintage handbags, cat related items, powder compacts and commercial perfume bottles, as well as a selection of vintage clothing and fashion accessories.

Vintage Modes is a hidden boudoir; lined from floor to ceiling in red velvet, it’s easy to spend hours hidden among their rails of carefully curated fashion. All vintage clothing is sourced by fashion expert Susie Nelson and June Victor and each piece is scrupulously hand selected for condition and style. Gillian Horsup, Arabella Bianco and Lola of Unicorn adorn Vintage Modes with their stunning collection of costume jewellery such as Art Deco diamanté brooches, Egyptian revival jewellery, Bakelite and celluloid bangles, as well as key pieces from renowned jewellery designers such as Kenneth Lane, Miriam Haskell, Schiaparelli and Trifari.

Situated just opposite Bond Street Tube Station Grays couldn't be easier to reach. Visit Monday- Friday from 10am-6pm or Saturdays from 11am-5pm. Come on down for your unique vintage find!

Diamonds might be forever but rubies are for eternity! Throughout history, rubies have been considered the “King of Gems” and the symbol of status and success. Associated with love, passion, power and royalty they were essential elements of royal insignia and a favoured jewel among many celebrities.

This highest valued coloured gemstone is extremely hard and durable yet almost all naturally mined rubies have flaws tolerated as part of the nature of the stone. In fact, large eye clean rubies are extremely rare and can command higher prices than diamonds. Rubies can be found all over the world but the finest rubies were originally mined in Myanmar, formerly Burma hence the name Burmese ruby.

Rubies are found in a variety of reds, ranging from pink to blood-red stones with the most desirable colour “pigeon’s blood”, a deep red with a hint of blue.  The red hue comes from traces of the mineral chromium.

Rubies represent the month of July and are also the traditional gift for 15th and 40th wedding anniversary. These eye-catching gemstones are very hot trend on red carpets and a popular choice for smart investors!

Whether you are a good investor or simply looking for that special gift for your loved one, we have a great selection of ruby jewellery at Grays: