Blown Glass: From Sand to Craft

Today, the glass blowing technique is at the height of its powers for artistic and much experimental purposes. But it hasn’t always been about the art. Historically, it was the increase in shapes and in designs that the invention of glassblowing made possible which contributed to this method of glass forming becoming pre eminent. Soon after, the mold-blowing process developed as an offshoot of free-blowing and was used as an alternate method.

As a novel glass forming technique created in the middle of the last century BC, glassblowing exploited inflation as a working property of glass. Inflation refers to the expansion of a molten blob of glass by introducing a small amount of air to it. Glass blowing involves three furnaces with the transformation of raw materials into glass at about 1,320 °C in the first stage and the transformation of glass from a pale white to bright orange. The glassblower would manipulate molten glass while still malleable and create patterns, handles, or flanges.

There’s evidence that glass vessels have been produced in Egypt and Mesopotamia since the fifteenth century but their introduction into Europe didn’t happen until the 5th century B.C. By the time of the Roman Republic, glass is used widely in the Italian peninsula as table ware, and as vessels of all shapes and sizes containing oils, food, medicine and perfume. We don’t know why this is the case but it’s suggested that the Roman glass production came from almost nothing to become a complex and highly developed industry. Core-formed glass dominated the Greek world but blown glass came to dominate Roman glass production and Roman military and political expansion carried the glass production and distribution with it. At the height of its popularity in Rome, glass was present in every aspect of daily life and glass was being blown in many areas of the Roman Empire.

During the first centuries of Islamic rule, glassmakers in the Eastern Mediterranean continued to use the Roman recipe consisting of calcium-rich sand and minerals from Egypt. And in fact, Islamic glass did not begin to develop a recognizable expression until the late 8th, despite the wide spread of Islam across the Middle East and North Africa with the Eastern Mediterranean remaining a centre of glass production. The Roman and Mesopotamian glassmaking industries continued in much the same way they had for centuries earlier. But following the unification of the entire region, the interaction of ideas and techniques was facilitated, allowing for the fusion of these two separate traditions with new ideas and the creation of a distinct Islamic glass industry.

The Crusades made the European discovery of Islamic gilded and enamelled vessels possible and on an unprecedented scale. During the Renaissance, Bohemia, part of modern day Czech Republic, became famous for its beautiful and colourful glass. With an abundance of natural resources found in the countryside, Bohemia turned out expert craftsmen who made Bohemian glass famous for its excellent cut and engraving.

The fascination with glass is ever present and evolving as it allows for innovation and stylistic expression for the glass blower by turning technology into something close to magic.

We invited our nearest and dearest to a special celebration last week.  The party was to celebrate 50 years since Bennie Gray opened the first permanent covered antique centre in London, the Antique Supermarket, on Barrett Street.

As guests entered they were greeted with lively music from Balkan brass band, Op Sa!  Guests were treated to drinks and canapés served by elegant ballerinas.  Speeches from Neil Jackson, Operations Manager at Alfies and Grays, and Bennie Gray followed.

As an extra surprise Jae Alexander, one of the top musical conductors in the country and Brighton legend David Raven aka Maisie Trollette sang a few numbers much to the delight of the guests.


A birthday cake was brought out to the tune of Happy Birthday and an 18th century sword from Grays Mews dealer Don Bayney was used to ceremonially cut the first slice! 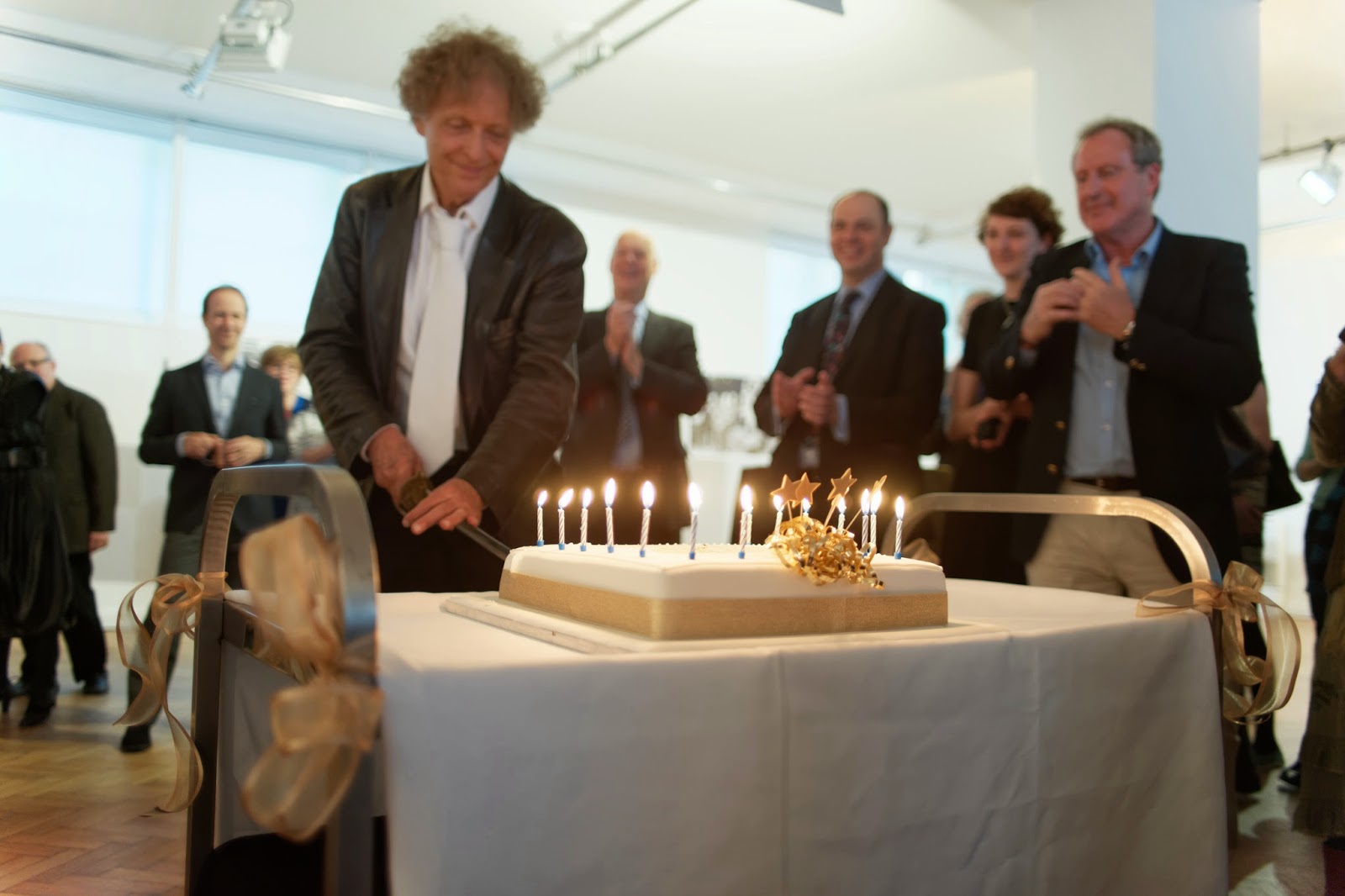 All in all it was a wonderful evening and the perfect way to celebrate such a landmark year!  Read more about the history of the London antique markets here.


With thanks to Graham Lacdao for the photos.
No comments:

Bennie Gray was just 26 when he opened the Antique Supermarket on Barrett Street.  Just around the corner from Selfridges in an old printing works, it quickly became a hub for the trading of antiques.

At that time there existed several antique markets operating one day a week and there were many specialist antique shops but, before the Antique Supermarket opened in 1964, London did not have a permanent indoor market where antique dealers had the opportunity to trade all year round without having to dismantle their stock at the end of the day.

The concept proved popular and, with the exception of a few poison pen letters received from some of the more traditional members of the trade, the Antique Supermarket was soon filled with a variety of antique dealers.  After a quiet start, with all the energy put into the opening, the word spread and the centre's popularity grew to eventually establish a star studded clientele.

In 1968, off the back of the Antique Supermarket’s success, Bennie Gray opened the Antique Hypermarket on trendy Kensington High Street and, a few years later, Antiquarius on the Kings Road, Chelsea in 1970.  Bennie eventually sold these markets and each continued for a time.  Antiquarius was sold again in 2009 and the building has now become US store Anthropologie.

Alfies Antique Market came next in 1976, named after Bennie’s father, jazz musician Alfie Gray.   Bennie Gray was born on Cosway Street, just around the corner from Alfies, and when the dilapidated Edwardian department store, Jordan’s, came up for sale he jumped at the opportunity.

At the time the deteriorated state of the building was echoed along Church Street, where what had once been a thriving working class community fell into the familiar pattern of inner city decay with shops boarded up and vandalism rife.

Alfies opened to become an unpretentious, un-daunting antiques experience, eventually welcoming a younger, design-led crowd.  Bennie is justifiably proud of the impact Alfies has had on Church Street. Some 20 independent dealers also now line Church Street, many of whom started out with a stand at Alfies.

In 1976 Bennie opened Grays, at 58 Davies Street.  The Edwardian Grade II listed building was originally built for John Bolding & Sons, a manufacture of sanitary equipment.  Bolding had the building commissioned to house a showroom on Davies Street and workshops at the rear in Davies Mews.

A year after Grays opened work began on the rear workshops to become Grays Mews.  For a time the basement was continually flooded and architects found the source to be part of the underground river Tyburn, a tributary to the Thames.  This water was channelled to create a water feature that can still be seen today.

Today Alfies Antique Market, Grays and Grays Mews are London’s largest permanent centres for antiques and are collectively home to over 250 small businesses.  Open all week, the key to the success comes from the antique dealers themselves, their passion and dedication to finding and trading in beautiful objects and passing on the unique histories that accompany them.  In a world of internet shopping, this personal service is becoming a rare find.  All three centres are full of experienced specialists, each with their own area of knowledge and expertise.  Here's to another 50 years!
No comments: