Cold painted Vienna bronzes have been on our radar for some time now. This special type of bronze is made using a cold-working technique to create highly desirable pieces. Mariad from Mariad Antiques (Stand 359) is the only dealer in Grays to specialise in Austrian bronzes and we are glad to have her expertise in house.

Cold painted Vienna bronzes were designed directly by the artists who would shape the casting moulds for further reproduction. A single bronze figure was often cast in separate sections using a method known as sand casting and then welded together and handed over to the painters. This labour intensive process required highly skilled craftsmanship. Cold-painting relates to the surface finish, a key element in this type of bronze, and it can involve several processes which take place after the casting is complete. Work on the surface of cast bronzes gives texture and sharpens surface details. Several layers of heavy lead based paint are then applied to the bronze. The standard of painting is of great importance and determines the quality of the final piece.

Vienna bronzes were created in the 19th century in the epoch of the Biedermeier where the self-confident bourgeois developed a new culture of living and social life. Around 50 manufacturers resided in Vienna at the turn of the century. Very soon Vienna Bronzes were considered as show-pieces held in high regard as luxury items and very collectable. They were finely detailed miniatures and table top figures depicting life-like natural subjects, often in cartoonish, satirical, or whimsical situations. The range of characters included pets and forest animals, Oriental subjects, Black Americana, expedition and travel inspired subjects as well as erotic figures. Vienna bronzes vary in size from tiny 1 inch miniatures to as large as a table lamp or a centrepiece.

Carl Kauba was another well know maker whose work is usually associated with bronze figures depicting Native American Indians and cowboys. His work is truly astounding, showing great attention to detail and sheer movement in each piece.

Sadly many Vienna bronzes have not been marked or signed. Several sculptors and models would sell their work to bronze manufacturers, who then reproduced these. This means that a stamp (hallmark) alone shows who the manufacturer was, but not the creator.  For this reason, the artists remained largely unknown.

Vienna bronzes are still in production today via the Bermann manufactures who took possession of the Bergman name and logo, as well as older designs and casts. Some experts believe that the more recent pieces are lacking in character. This could be due to the fact that the modern manufacturing process compromises on labour and time as well as the type of paint used. At the turn of the 20th century the lead based paints were no longer permitted due to health risks involved. This is a pretty clear way to date a piece since the earlier bronzes were decorated with the lead based paint which gave the finished piece the dept and rich texture.

Whether you are a seasoned antique dealer or a newbie, we hope that these little lovingly created bronze figures will capture your imagination with their fine detail and broad variety of subjects. Here are our favourite pieces: 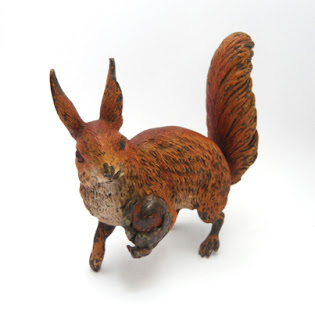 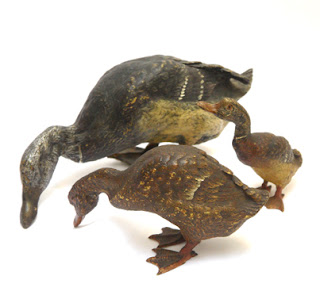 Collection of bronze mallard ducks. Circa 1890-1900.
Offered by Mariad Antiques. 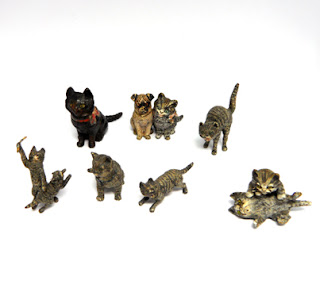 Collection of bronze cats. All comical. Sizes from miniature to 5 inches .
Circa 1910-1920. Offered by Mariad Antiques. 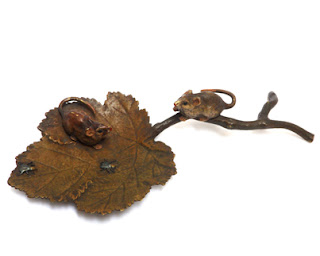 Two bronze mice on a vine leaf accompanied by two flies.
Circa 1900. Offered by Mariad Antiques. 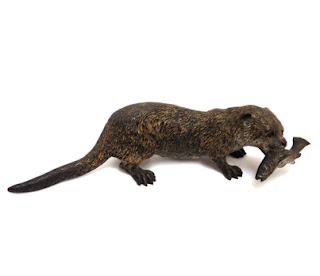 Gold painted rare Vienna bronze otter with a fish in its mouth.
Circa 1890-1900. Offered by Mariad Antiques. 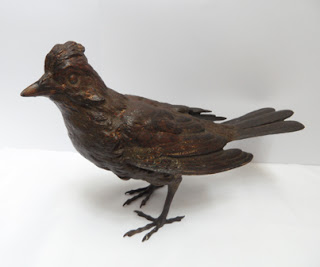 Here at Grays we have some of London's finest dealers, many of whom have been trading with us for over 20 years and have permanent stands from which they sell to an established and international clientele.

As well as the larger stands we also have a selection of serviced showcases that offer smaller antiques, costume jewellery, glass, ceramics and collectables.  Due to their success we have just expanded this area and have some brand new showcases available to experienced antique and vintage dealers.

Gifts Fit For a Baby Prince

Since the arrival of the royal baby the whole world has been talking about baby gifts which continue to arrive from all corners of the world. Here at Grays, we too have caught some of this royal baby fever. We have been searching for some special antique and vintage items to mark and celebrate the birth of a new baby. Here are our favourite pieces: 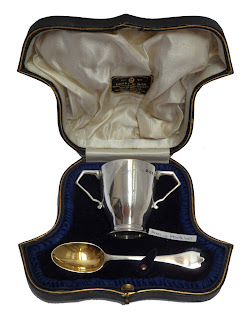 Made in London 1975 by Jocelyn Burton for Aurum, this wonderful porringer was made to commemorate 300th year of St Pauls Cathedral, and is of beautiful heavy quality (image above). It would make an ideal Christening present.


This hand hammered sterling silver christening mug (image above) was made by Georg Jensen in 1925. It is beautifully made, and a fine example of Denmark's answer to Art Nouveau silver. 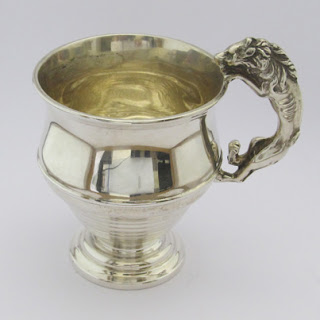 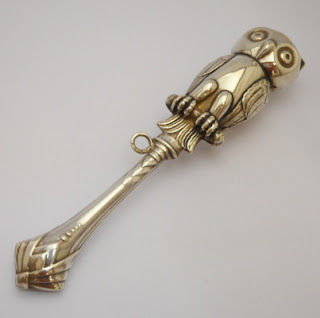 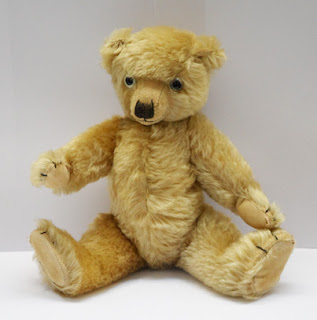 This is a superb Chiltern Bear dating from the 1930s.
Offered by Sarah Sellers.

For more information visit Grays at: www.graysantiques.com
No comments:

We are installing a new telephone line tomorrow (Wednesday 14th August) at Grays so our phone lines may be down intermittently throughout the day. If you can't get through please keep trying or send us an email info@graysantiques.com

Jet is the New Black

Here at Grays we do a lot of exciting loans. Our objects may travel from French Elle Magazine to Russian Vogue for styling, photo shoots and more. But there’s one particular loan that lately captured our imagination. It also reminded us of something we already knew: that you get a totally different sense and appreciation of objects once you start handling them or you get a closer look at them.

My theme is jet. Organising, cataloguing and packing the jet jewellery for a photo shoot made us aware of jet as more than a decorative, aesthetic piece. Jet as a geological material is considered to be a minor gemstone. Jet is of organic origin derived from decaying wood under extreme pressure containing pyrite inclusions which give it its brilliant lustre. Hair pins, rings, necklaces, pendants and bracelets have been created from jet, including amulets and rosary beads.  Pliny the Elder writes about jet and it is well documented that in the Roman period jet was thought of as a ‘magical’ and ‘protective’ material. Later on jet is used in Abbeys and Monasteries to make rings, beads and crosses for the Monks. But it is both the material qualities and its manufacture into jewellery that makes jet so alluring.

In fact its warm tactile quality seems to transmit something of its special history, original location and elaborate manufacturing process. Jet takes great expertise in carving because although soft it can easily fracture, therefore, it requires a lengthy apprenticeship and dedicated workmanship. Jet is a rare gemstone as it can only be found in certain areas of England and Germany.

Whitby in Yorkshire has, famously, been producing jet jewellery since the Bronze Age. It came into prominence again in the Victorian period when jet was mostly associated with mourning jewellery. Whitby jet has been found all over Europe, from the early Bronze Age to today, in Norway, Sweden, Finland, Italy and Spain. The early 1800s saw a meteoric rise in jet production in Whitby, where all sorts of shops and workshops dedicated to the manufacture and trade of jet jewellery sprang up well before the death of Prince Albert and Queen Victoria chose it as her favourite decorative gemstone. By the end of the 19th century trade had much declined. But even today Whitby jet carries with it the special magic of its original production and aesthetic quality. 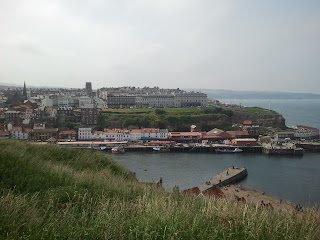 A view of the Whitby Harbour 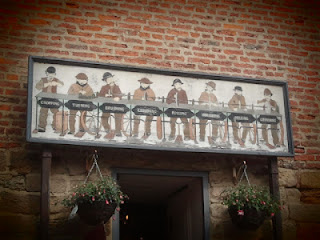 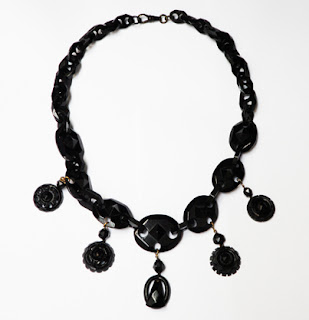 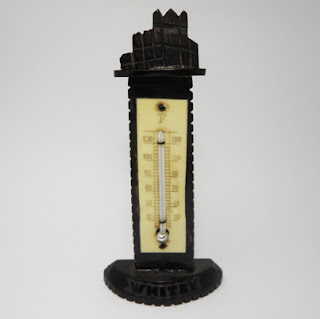 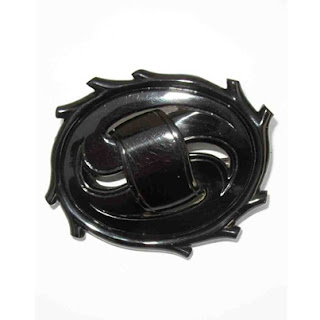 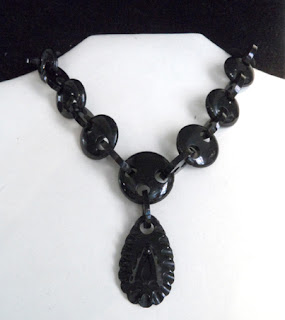 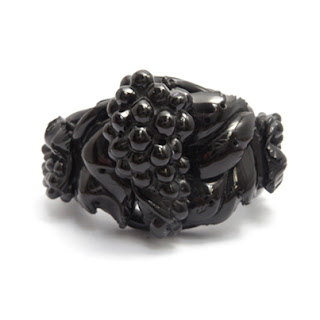 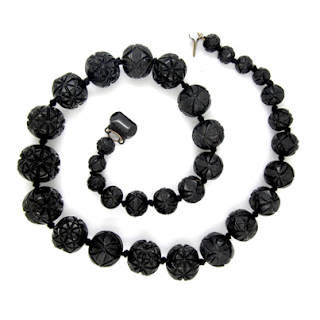 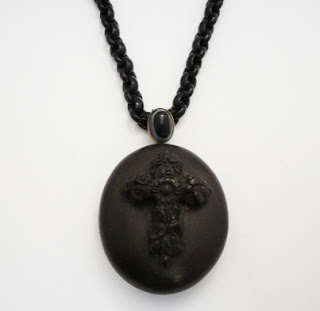 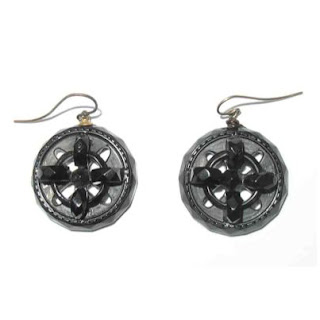 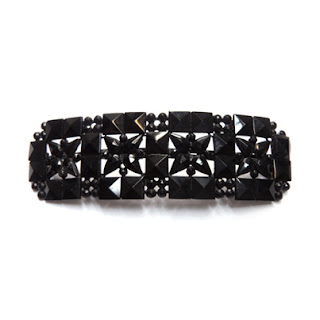 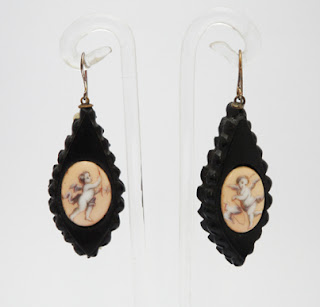 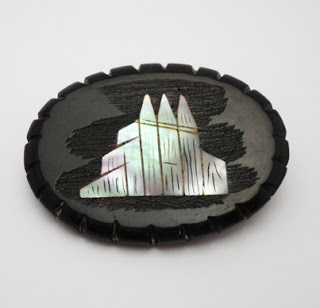 Jet Brooch with Mother of Pearl offered by Allison Massey 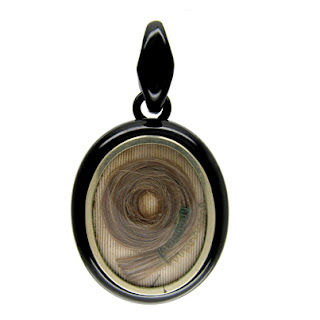 A large Victorian Jet Locket offered by The Antique Jewellery Company. It is completely plain on one side and the other has a silver and glass locket section with a lock of hair.

The new stand looks fantastic and we had the opportunity to find out what pieces he currently has on display.  Here are our favourites.

The large piece seen in the image above is a fine hand woven aubusson silk and wool tapestry depicting a shepherd and shepherdess asking a hunting party to intervene and rescue a lamb. There is a chateau in the background and cascade to the foreground, with full borders of floral foliate design.  French - circa 1680.  This large piece measures 279cm x 275cm.


A late 16th century/early 17th century tapestry (image above) woven in coloured wools and silks with the Good Samaritan attending a traveller, his horse grazing, a woman approaching the trees and buildings in the background. There is a stunning foliate border with a swan to each side and a dog to the top and bottom, each lower corner has a vase of flowers.  This is probably English and was once part of the Mayorcas Collection.  The tapestry measures 56cm x 52cm.

Also on display are a set of five beautiful Aubusson cushions that have been hand woven in silk and wool circa 1860 with a fringe added at a later date (image above).  Robin has a few decorative items in store too, including a particularly fine Continental parcel gilt wall candle holder from the early 20th century.


Robin Haydock still stocks a fantastic collection of jewellery dating from around 1780 right through to the present day.  Find his new stand 131-132 downstairs at Grays.
No comments: