With just one more day to go before Burns Night, we are celebrating the life of Scotland's favourite son with sharing some of our best Scottish antique pieces. 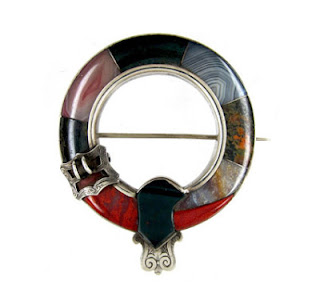 A pretty silver Scottish garter brooch, made circa 1860. It is set with different agates sourced from Scotland, and would have been sold to the tourists at the time. 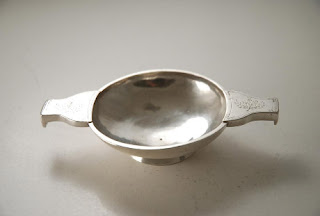 This rare Scottish silver quaiche was made in Glasgow circa 1743 by James Glen. Scottish silver of this period is rare, and Glasgow silver even more so. It is slightly crudely made, with beautiful thistle engraving on the handles. Inside the bowl are traces of stave engraving, which was intended to simulate the wooden construction of original wooden Scottish quaiches. 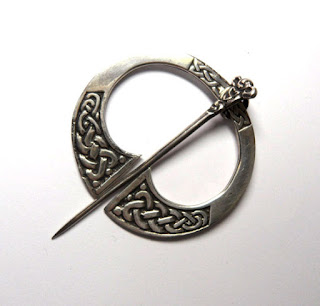 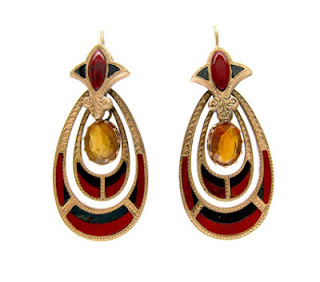 
A fabulous pair of rare Victorian Scottish hoop earrings. They are set with different hardstones such as bloodstone and jasper. They were made circa 1860 when Queen Victoria bought Balmoral castle and it became the fashion to wear all things Scottish. The central stones are citrines. All the stones were sourced in Scotland. The over all effect is colourful and very smart. 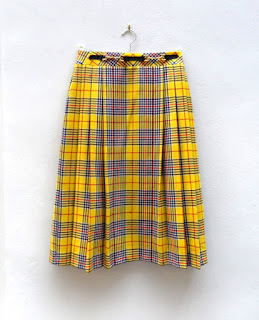 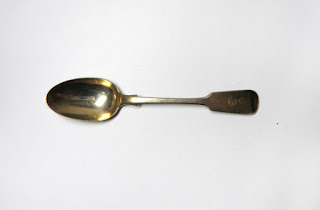 A rare Scottish silver spoon, made circa 1870/1871
Offered by Osmanieh Antiques

C.R.Ashbee & the Arts and Crafts Movement

The Arts and Crafts movement took place largely between 1860 and 1910.  One of the most far reaching movements of modern times, it started primarily in Britain and spread internationally to Europe and North America.  With industrialisation affecting the decorative arts in terms of design and manufacture, the movement stemmed from the ideals surrounding the art and joy of craftsmanship. Taking things back to a more traditinoal way of working, Arts and Crafts designers often took inspiration from romantic, medieval and folk decorative styles.


We are seeing a similar resurgence in craft now, with people moving away from mass produced items and instead seeking the handcrafted.  Just as it was then, more people value quality of design, materials, and craftsmanship.  This is also one of the many reasons people collect antiques and can partly explain the current trends for antiques and 'vintage'.

There were many people who played a part in founding and encouraging this movement, notably writer John Ruskin and designer William Morris. However in this post we will take a closer look at the work of Charles Robert Ashbee, an English designer who's work can be found at Van Den Bosch’s stand in Grays.


C.R.Ashbee most notably founded the Guild and School of Handicraft in 1888.  It's aim was to promote the value of the craftsman and their work to the wider public.  Starting out in temporary workshops in Whitechapel, London, the Guild expanded to Essex House on Mile End Road and opened a shop on Brook Street, just near Grays current location in Mayfair.  In 1902 the workshops moved to Chipping Campden in Glouchester where they stayed until the business closed in 1907.


All images are from Van Den Bosch and the items can be found in stand 123 at Grays or on their website www.vandenbosch.co.uk
No comments:

Grays is the destination. February is on the way and it is the perfect month as it is historically dedicated to courtly love. Whether you follow the tradition of High Middle Ages in which St Valentine is the patron of lovers or the pagan calendar where the holiday of Lupercalia dedicated to purification and fertility.

Be prepared. It may not even be certain that St Valentine is identified with one or several saints  or that the feast was in fact invented in 14th century England where it first came to be associated with romantic love and further associated with all types of romantic symbolism of colours flowers and precious and semi-precious stones in the Victorian period.

It’s gone a full circle and it’s here with us now, in Mayfair in London at Grays.  Here at Grays our dealers have collected the finer examples of antique and vintage items that are unique for that special time in the year.

Turquoise is considered to be a symbol of generosity, sincerity, and affection.  Traditionally is is said to only bring good luck if given, not purchased which makes it the perfect stone to be given as a present!

Of course there are the classic heart shaped and flowers that remain symbols of this special day and who are we to argue with tradition!

Shortlisted: Antiques Centre of the Year

Grays has been shortlisted for Antique Centre of the Year in the Homes & Antiques Awards 2013.
The awards celebrate antique shops, vintage stores, and antiques centres all over the country and each shortlist has been compiled by leading experts and industry members from LAPADA, BADA and the Antiques Trade Gazette.
Now it's your chance to have a say in who should win each category!  Simply visit the Homes & Antiques website and cast you vote.
By voting you will also be entered into a draw to win a fantastic weekend away at London's Draycott Hotel.
Voting closes on the 28th February and the winners will be announced at the Decorative Antiques & Textiles Fair in Battersea, London, on 25th April.
Every vote counts so please support Grays and our knowledgable and diverse antique and vintage dealers! Click here to vote now.
No comments:

Happy New Year from everyone here at Grays! It's nice to start 2013 with a new showcase dealer, Bijoux Trading located in the Mews sell 18th and 19th Century collectable jewellery and objects.