The Wellcome Collection exhibition programme is a fantastic conglomeration of art, science, history,and intrigue.  The enticing slogan on the flags that flank the front entrance read 'Free for the incurably curious' and their exhibitions never fail to provoke curiosity and knowledge about topics that often centre around the every day, the way people live or have lived. 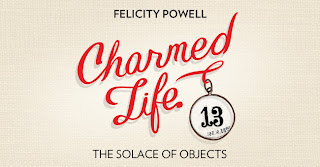 At the moment there are two simultaneous exhibitions, Miracles & Charms.  The Miracles exhibition displays a huge collection of Mexican votive paintings. Paintings commissioned by everyday people giving thanks to patron saints for answering their prayers during times of need.  These  portrayals of sometimes tragic incidents give an optimistic insight into the power of prayer and belief. 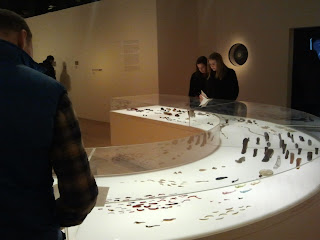 The second exhibition, Charmed Life: The Solace of Objects, shows a more superstitious side to the same principle of investing hope and faith into something, be that a religion or a physical object.  Artist Felicity Powell has explored the incredible collection of 1400 amulets amassed by Edwardian amateur folklorist Edward Lovett.  These amulets and charms were once carried in Londoner's pockets for a whole range of reasons from protection and healing, to luck and love. 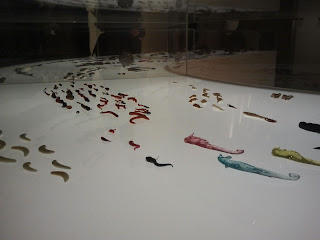 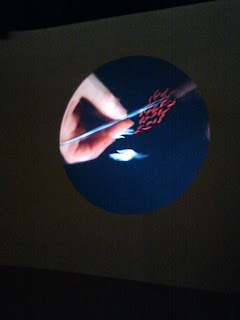 Using black backgrounds and soft white wax to create beautiful ghostly imagery, Felicity Powell's own artworks reflect the deep sense of dark magic and potency of Lovett's much-touched objects.  These delicate dark wax paintings perfectly compliment the tiny amulets on display in their white horseshoe-shaped display case.  One of the most interesting aspects of the Wellcome Collection's programme, and certainly the Charmed Life exhibition, is the ability to draw parallels between old and new and shed a new perspective on an almost forgotten part of social history.  Miracles and Charms is on display until 26 February.
If you search Grays you can sometimes find charms and amulets in the dealers collections: 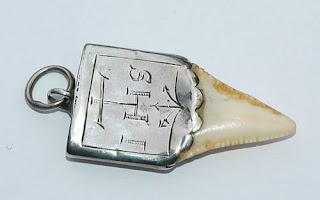 18th Century Amuletic Shark-tooth Pendant. From Rowan & Rowan at Grays.
"An early 18th century amulet pendant, a fossilised shark-tooth set in an engraved silver mount. Contemporary literature suggests that most of these teeth came from the Tertiary rocks of the Maltese Islands. The local populace called them 'serpent tongues' and believed the teeth were associated with the shipwreck of Saint Paul on their island. St. Paul was bitten by a serpent, blessed the island and cursed the viper. This purportedly rendered the local reptiles perpetually harmless. All courts in Europe used shark-teeth as amulets to detect poisoned food or drink and they were also believed to provide protection against the evil eye." - Michele Rowan. 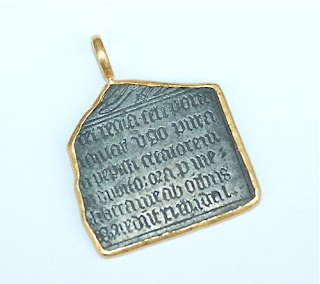 15th Century Pilgrim Badge Pendant.  From Rowan & Rowan at Grays.
"A silver fragment from a late 15th century pilgrim badge, later set to a high carat gold pendant mount. Medieval society was religious to an extent that is difficult for many of us to comprehend today and its depth of religious belief was manifested in the cult of the pilgrimage. Pilgrims travelled across the known world to visit the shrines of saints, seeking absolution of sin or miraculous cures for illnesses. To the medieval mind, the miraculous power of a shrine or relic could be transferred to anything that came into contact with it, giving rise the the first mass produced tourist souvenir, the pilgrim badge. Badges varied greatly in quality, some were crudely made while others were finely crafted.
This badge is of superior quality, silver rather than base metal and beautifully inscribed with a fragment of a Latin antiphon and prayer based on the doctrine of the Immaculate Conception." - Michele Rowan. 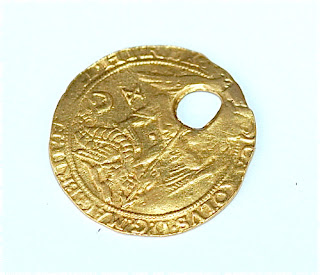 Charles 1st Gold Touch-piece. From Rowan & Rowan at Grays.
"Persons of royal blood were believed to have God-given powers of healing by touch, and the sovereigns of England, from the reign of Edward the Confessor to that of Queen Anne, used their 'powers' to cure sufferers of scrofula or Swine evil, a form of tuberculosis commonly known as 'King's Evil'. Charles 1st issued Angels almost exclusively as touch pieces, making intact specimens rare." - Michele Rowan. 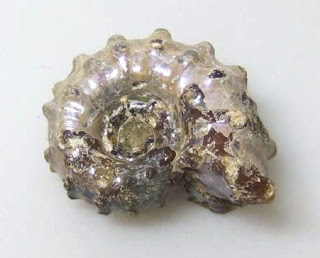 Douveilliceras Ammonite. From Fossil Earth, Grays Mews.
Ammonite fossils have been used since the middle ages as powerful protective amulets against things like snakebites, fevers and eye problems. 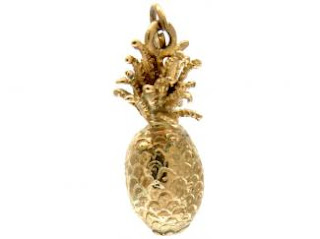 Mid-Century Gold Pineapple Charm, c1950s. From The Antique Jewellery Company at Grays.
Pineapples are an old a symbol of hospitality.  Being a luxury fruit, Pineapples were an extravagant treat for well to do families at dinner parties and special events.  Visitors felt honoured by their host as pineapples on the menu showed that no expense was spared in entertaining the guests.  The exotic fruit with it's distinctive shape came to symbolise high spirits, good cheer, warmth and affection.
On The Wellcome Collection's website you can watch a videoabout amulets in every day (modern) life. Click here to view.
No comments:

Date for Your Diary:

This year the Chinese Calender will be celebrating the year of the Dragon. Chinese New year 2012 falls on the 23rd January and there will be many celebrations held throughout London including the main parade at Trafalgar Square on the 29th January.  Time Out have full details and listings about the celebrations in Central London. Grays has many Oriental Treasures and we have picked out a few for you with a festive theme!

Sam Rogers of Brides Magazine recently got in touch about engagment rings.  Below is an article that was a result of chatting to one of our jewellery dealers, Olly Gerrish.  You can read the original article on bridesmagazine.co.uk by clicking here. 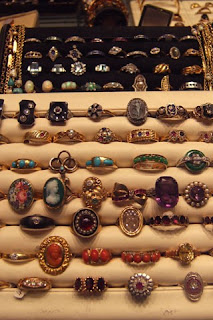 Olly Gerrish is one of the many friendly faces that will greet you upon arriving at Grays Antiques Market, home to one of the world's largest and most diverse collections of fine antiques, jewellery, and vintage fashion. The Antique Jewellery Company, an online version of her and her business partner Jo Elton's stand in the famous antique market showcases their beautiful rings and jewellery. With over 30 years experience of selling antique jewellery, we thought Olly would be the perfect person to give us some expert tips on buying an antique engagement ring:

Why opt for an antique or vintage engagement ring?
"Because the chances are that you will never see another one like it. We only purchase unusual original rings that are well made and have stood the test of time. You will not be wearing a uniform like so many single-stone diamond rings that modern makers produce, but something unique which is a real talking point."

What should you ask when buying an antique ring?
"You should always ask what the carat of the gold is (18 or 15 carat) which a lot of antique rings were made in. Nowadays the norm is 14 carats, so don't be surprised if a dealer says the ring is 15 carat. Some rings are not marked but have been tested with acid to ascertain the quality of the gold. Also ask about the size of the stones: the dealer should be able to tell you the carat weight. Enquire about the quality of the stones; colour and clarity. This is important with diamonds which can be colour and clarity graded, if they are large enough. Small diamonds can fairly easily be assessed with a loupe. You should also look for chips, if they are drawing colour, and internal marks which all affect the value. Ask if the ring has been restored in any way. This is important, although old resizing is perfectly permissible."

How is buying an antique ring different to buying a new ring?
"Yes, it is a whole different experience. You get to meet a host of dealers who are enthusiastic about what they are selling - they will really put their money where their mouth is. It is important to go to a reputable dealer, and at Grays there are well known dealers who have years of experience. The market is also very competitive, so the prices will be fair."

What sort of price ranges or budgets would you say are the 'average' price of a vintage ring?
"Anything from £500 to £3,000 will buy you a really gorgeous ring with real history."

What is your top tip on choosing engagement rings for newly engaged couples?
"Do your market research; look at web sites such as ours, make a shortlist then come in to Grays and view the rings. Once there, ask to look at the ring with a loop - the dealer will be happy to assist you. Prepare some questions on condition, size of stones, age etc. and away you go!"

With only one month to go before Valentines Day, we want to show you some of the stunning engagement rings on offer at Grays Antiques. As it is the most popular day of the year to pop the question, our jewellery dealers have both the expertise and knowledge to help you pick out the perfect ring.

Grays jewellery dealers stock a fine collection of engagement rings from all periods, with styles to suit individual tastes and have years of experience, along with some very sound advice. 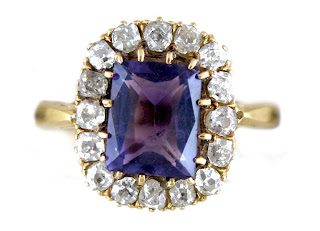 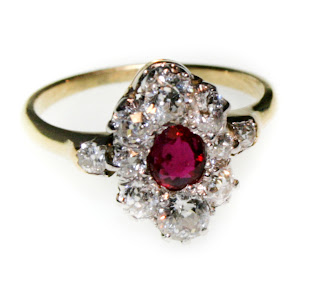 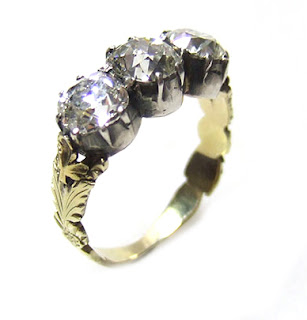 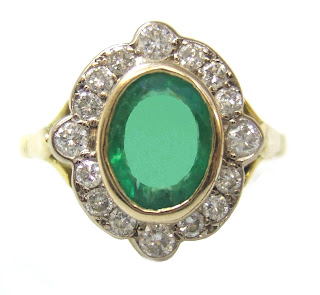 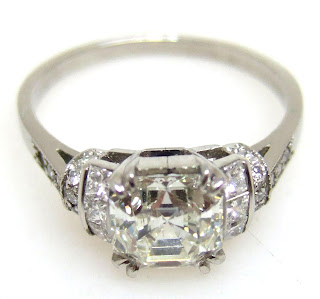 
For more information read our 'Grays Guide to Buying an Engagement Ring' or come and visit us in Mayfair
1 comment:

With all of this wind, rain and snow, it's no wonder that we're hoping for a little warm weather.  Get your spring wishlist going with lovely perfume bottles for new fresh scents, some floral and pastel outfits to wear under the sun, and other lovely trinkets to welcome that springtime fun.


And don't forget to look out for Valentine's Day news from Grays and Alfies!
No comments: