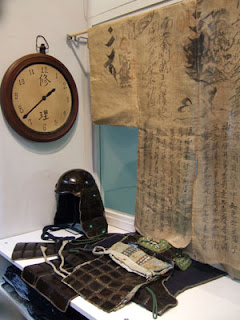 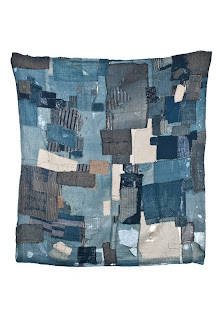 An Example of a Indigo Boro Textile
Yasuko Kido is a new dealer at Grays. Situated in Grays Mews she stocks a stunning array of Japanese textiles and works of art.
Yasuko Kido has been dealing in Japanese art for more than twenty years. Formerly a specialist of Japanese prints at Sotheby’s London, now she concentrates on Japanese textiles and works of art including Buddhist objects and Mingei works.

Yasuko was first enlightened by the beauty of these folk textiles when she assisted a Japanese dealer at the Hali textile fair in 2003. Since then she has endeavoured to promote Japanese traditional techniques of textile making including sashiko, shibori and kasuri that have been long forgotten and replaced with modern technology.

Antique of the Month: Charms

Novelty 15ct Gold Victorian Locket &  Emerald and Ruby Gold Hand Charm, c1850.  Both from Jo Elton & Olly Gerrish, Stand
Charms (thought to originate as far back as the Neolithic era!) have a history of resurgence that charts many fascinating historical moments. Charms have long been instilled with a powerful sense of significance and symbolism - from early Christians using fish charms to secretly symbolise their faith, to the soldiers of World War II collecting charms as remembrance of people and places known during the war.

Edwardian Binoculars Charm. From Jo Elton & Olly Gerrish, Stand
The Victorian era saw one such popular resurgence in the wearing of charms, with Queen Victoria herself setting the trend. Not only did Queen Victoria wear charm bracelets herself, but she also commissioned specially made charms to give as gifts.

Victorian Lunettes on a Extra Long Chain with Small Mother of Pearl Locket.
From Ting's Jewellery Box, Stand C22-23
The enduring fascination with charms is undoubtedly due in large part to the way they can be used to personalise jewellery, as with the classic charm bracelet. The current renewed trend in charms focuses on customising. Single or clustered charms can be worn as unique pendants or on bangles or bracelets, and varied from day to day to suit your mood or your outfit!

Alan Wilson’s Arts of Asia showcase features stunning cloisonné vases, lacquer boxes, delicate porcelain and much more! Plus he’s having a summer sale, with 20% off everything in his showcase until the 31st August! Alan’s showcase, FS4, can be found downstairs in The Mews.
No comments: