Suffragette jewellery is back! This week the film "Suffragette” was released, portraying the suffragette movement's fight for women's right to vote and for steps towards equality in the early 20th century. 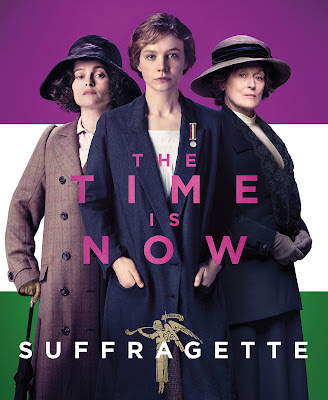 However, the true reason behind why these three colours were chosen is still not entirely clear. One thing we do know is that the style of jewellery at the beginning of the 1900s was moving towards softer and more feminine colours and shapes, of which the rise of Art Nouveau is a perfect example. Gems such as tourmaline, amethyst, pearl, peridot, diamond and emerald, set in gold or silver, were very popular and this could have possibly influenced the choice in colour. Wearing these gems would allow women who wanted to demonstrate their support and commitment to do so discreetly.

Another suggestion is that Mrs Pethick-Lawrence, an activist and editor of the "Votes for Women" magazine, connected the colours to the cause by writing: "Purple [...] stands for the royal blood that flows in the veins of every suffragette, the instinct of freedom and dignity; white stands for purity in private and public life; green is the colour of hope and the emblem of spring."
Another well know explanation is that Emmeline and Chris­ta­bel Pankhurst, also famous activists within the movement, adopted the three colours as: Green = Give, White = Woman and Violet = Vote; which was the slogan of the movement.

Whatever the reason or reasons behind it, suffragette jewellery is a very beautiful visual expression of historic courage and aesthetic delight and here at Grays we have some wonderful examples to offer.