After a decade away from the music industry Sade Adu is back with this ‘summer’s hottest ticket’ according to Billboard magazine. Helping her dazzling in the spotlight of her success is jewellery designer Donald Edge.  Donald has created a pair of bespoke diamond hoop earrings that promise to shine just as brightly as the star herself.
Critically acclaimed, Sade’s summer tour follows the release of Sade’s sixth album “Soldier of Love” (Epic Records) and is proving a sell out success.  Grossing $31.4million and with over 345,441 concert-goers in the US alone the tour is set to continue to Europe, South America and Australia. 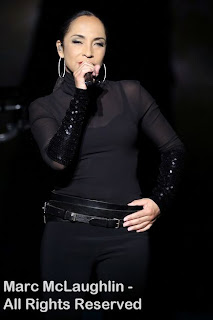 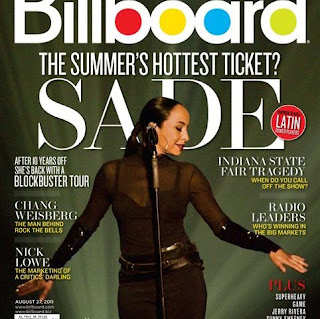 Top: Sade Adu with earrings by Donald Edge. Bottom: Front cover of Billboard Magazine. August 2011
Retailing at £18,000, the earrings designed by Donald Edge were designed to impress.  Approximately 7ct of rare white diamonds were carefully hand-selected, with only the very best examples making the final pair of earrings.  Every diamond has been skilfully micro set in such a way that only the diamonds are visible, the delicate frame beneath cannot be seen.  Not only does this enhance the diamonds but magnifies the wow factor tenfold! The earrings were also recently featured on the front cover of Billboard Magazine. 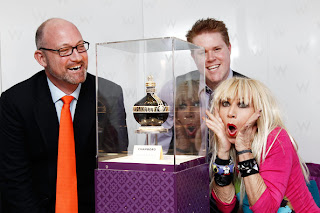 Right: Chambord by Donald Edge launch in New York with Betsey Johnson 2010.
Based at Grays in Mayfair, Donald Edge has over 25 years experience designing incredible bespoke jewellery for international clients. Travelling the globe to source precious stones and diamonds, Donald has a loyal following and has designed some spectacular one-off pieces. In addition to Sade’s diamond earrings, last year Donald also designed a diamond and pearl encrusted bottle for Chambord.  Worth $2million it is in the running for the world’s most expensive bottle ever created.